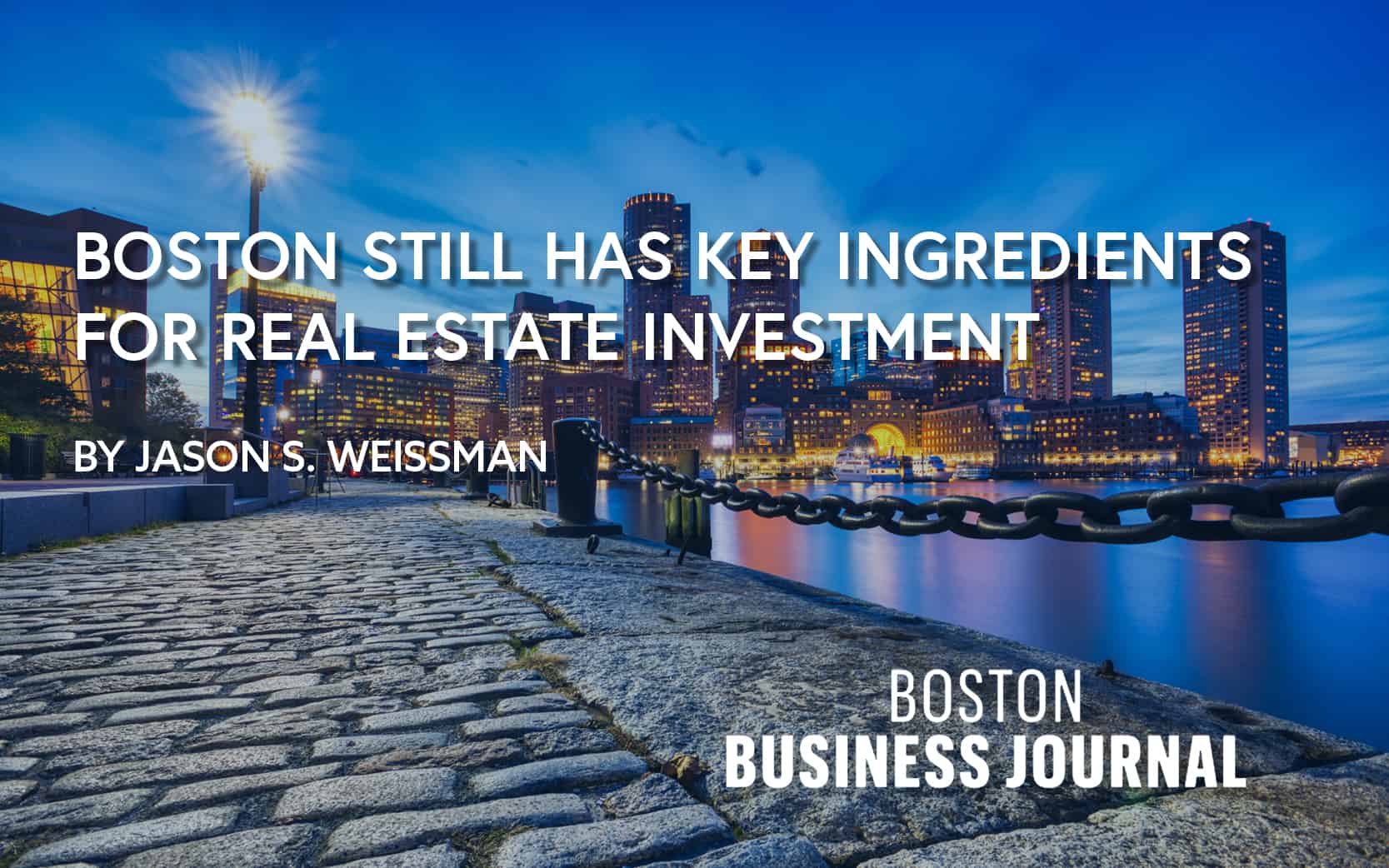 The Boston economy is emerging from the Covid-19 crisis stronger and more secure than at any point in recent history. The pandemic was a devastating surprise attack that affected all of us. It also delivered an unprecedented and valuable stress test to Boston’s commercial real estate asset class. Today, the results of that test — expressed in classic real estate fundamentals — show that the Boston region is arguably one of the nation’s top three markets for investors.

Here is a major reason why: Boston has a tremendous amount of immovable assets unique to the region.

While all real estate properties are generally defined as immovable, Greater Boston boasts a high concentration of properties that workers and students want and need every day. Stated differently, a significant percentage of the Boston workforce cannot, or don’t want to, perform their job from home.

For proof, look no further than Boston’s life sciences industry and its institutions of higher learning. Boston is the premier life sciences market in the U.S. As the life sciences sector continues to expand astronomically, the larger Boston’s competitive advantage will grow. Likewise, the region’s roster of colleges and university institutions of higher learning is unrivaled by any other city in the world. From a market standpoint, Boston is a city that offers unmatched intellectual capital. For example, the recent global advances in healthcare were not created by brilliant minds who work from home. These accomplishments cannot be made outside a clinical laboratory or specifically designed office setting. Likewise, students cannot experience the richness and fulfillment of a college education without being there – on campus and in person.

It is worth noting that Harvard University recently logged the highest number of applications for admission in its 385-year history. According to the Boston Business Journal, Harvard received 57,435 undergraduate applications for the upcoming fall semester, a 43% increase compared to the same period in 2020. Couple that statistic with Boston’s steady population growth. According to the research group Macrotrends, the current metro area population of Boston in 2021 is 4,315,000, a 0.14% increase from 2020. The city retains a significant percentage of its college and university graduates — a unique part of Boston’s DNA and a built-in annual population generator. Students come to Boston for its rich educational resources, and then they fall in love with the city and stay here. This is just one segment of the tangible population migration trend into the greater Massachusetts region.

According to the census data analyst World Population Review, Massachusetts is the third most densely populated state in the entire country, and the 14th most populated state in the US. Approximately two-thirds of the total Massachusetts population lives in Greater Boston. The state is currently the most populous of the six New England states, as well as the fastest growing.

Boston sports fans have made it clear that they want to be on location and at the action. Throughout its combined 270 years of professional sports (MLB, NHL & NBA), 2015-2016 was the all-time high economic valuation of Boston’s professional sports teams. People literally want to be there – at Fenway Park and at TD Garden — in person and at venues that cannot be physically moved.

The valuation of sports franchises is a telling analogy for prospective investors today. As technology continues to disrupt the business world, increasingly large numbers of investors are searching for stable safe harbors, places and spaces that technology will not disrupt. In other words, whether they know it or not, the investment community is searching for immovable assets.

Another hallmark of Boston’s pre-eminence is its emerging focus on diversity and inclusion. Acting Mayor Kim Janey is Boston’s first person of color as mayor. She is capable, smart and will help carry Boston forward, specifically with the focus on creating a fairer Boston. Diversity makes for a better city. As we look forward to the upcoming mayoral election, many of the candidates for the next mayoral election are also pro-business. Paradoxically — as innovative as Bostonians are — the lack of racial diversity has traditionally been one of the city’s weaknesses. It is good to see that this is changing. Bostonians have learned that a wealth of experience is not exclusive to any race or gender. This realization will elevate Boston’s culture and innovation to new levels.

In closing, Boston is coming out of the Covid-19 onslaught stronger than ever and better off than almost all U.S. cities. Billions of dollars invested in life sciences – in Boston alone – over the past year is helping Boston outperform other markets. Over the long term, the city’s ongoing expansion of life science enterprises and its historical role as an incubator of intellectual capital, will continue to feed Boston’s exceptional array of immovable assets. These unique attributes, complemented by Boston’s embrace of diversity, will assure the city’s preeminence as a global real estate investment market.